Berlin is according to a tour guide, a city still recovering from World War II and the occupation of the Soviets. The city has been rebuilt over the years. There is a mixture of the new, some built during the Soviet occupation, and the old rebuilt to look like its original state.

“In the Garden of the Beasts, by Erik Larsen is a must read book about the US ambassador Dodd’s time in Berlin prior to the war. He reported back to Washington and Roosevelt, about the changes in Berlin under the Third Reich, and Hitler Tyranny. The garden in the title is Tiergarten, which is a large park in the middle of the city. https://www.visitberlin.de/en/tiergarten 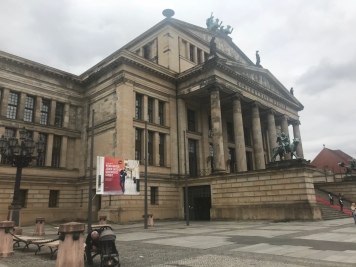 I checked in St Christopher’s Inn. The hostel was conveniently located across the street from Rosa-Luxemberg U-Bahn stop. It is a short walk from Alexanderplatz, where you can shop, or go up into a TV tower built by the soviets for a view of the city.

It was a chilly day despite being the middle of June. Dressed in my raincoat, I set out to see the city. There are two tours I recommend. One is an overview of Berlin’s history prior to the Nazi’s and after; which was free. The other is the Red Tour, about the communist occupation, was only 10 euros. There were several other choices as well. http://www.neweuropetours.eu 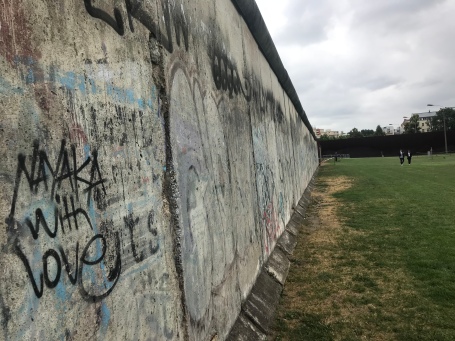 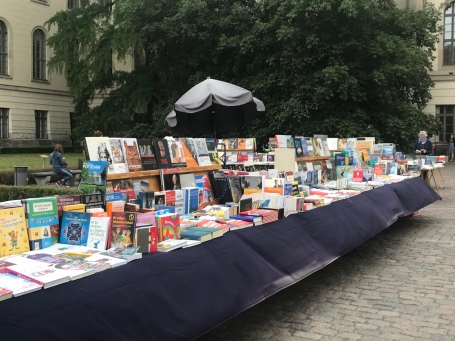 In 1961 soldiers surrounded East Berlin, then came the barbed wire, and the wall soon followed. It surrounded west Berlin that was inside of East Berlin. Bricks line the street showing where the wall once stood. A portion of it exist today to show what it was like, and to not let people forget about what took place. 140 people met their deaths trying to escape. The people of east Berlin were given jobs by the soviets, but not freedom. There were some who missed the security the Soviets gave them with those job and other State amenities. The tour will take you past a holocaust memorial. An man in the tour told us he was once a soldier on the west Berlin side. He and the east Berlin solider would joke with each other occasionally as they stood by their post at checkpoint Charlie. You will stand where Hitler’s bunker stood, and see it is now a parking lot. The movie “Downfall,” gives a good depiction of the final days of Hitler. A memorial to the book burnings across from Humboldt University is in the ground. Looking inside all you see are empty shelves. Albert Einstein attended and taught at the university. I bought a biography of him written in German at a book sale across from the memorial at the University. The tour also took us to the ghost stations. Read https://www.atlasobscura.com/articles/inside-the-forgotten-ghost-stations-of-a-once-divided-berlin. Music groups would play music by Brandenburg gate loud enough for those in the East to hear. David Bowie was one such singer. The Berlin Philharmonic was and still is considered one of the best orchestra’s in the world. I wish I had booked a show.

Despite all the pain experienced by Berlin and its people over the years, it is a survivor. It is a city that takes pride in itself, but it does not try to forget its past. It has learned from it, and seems to want others to learn as well. Check out more pictures in the gallery.

Peach Tea and Pickle’s….After a second Sunday getting a homemade gyro at the farmers market, I decided to make homemade turnip pickles from the recipe given by the proprietor of the food stand. Not being a fond of turnips, I was skeptical, but they were delicious. Peaches were in abundance at the market, so i picked out some nice ones for eating in salads and a few for tea. I made a peach syrup to add flavor to black tea with extra peaches. #peaches #farmersmarket #middleeasternpickles
I tried paddling boarding for the first time today. What a great workout for the core. It was a perfect day on the lake. #paddleboardfun
Loading Comments...
%d bloggers like this: