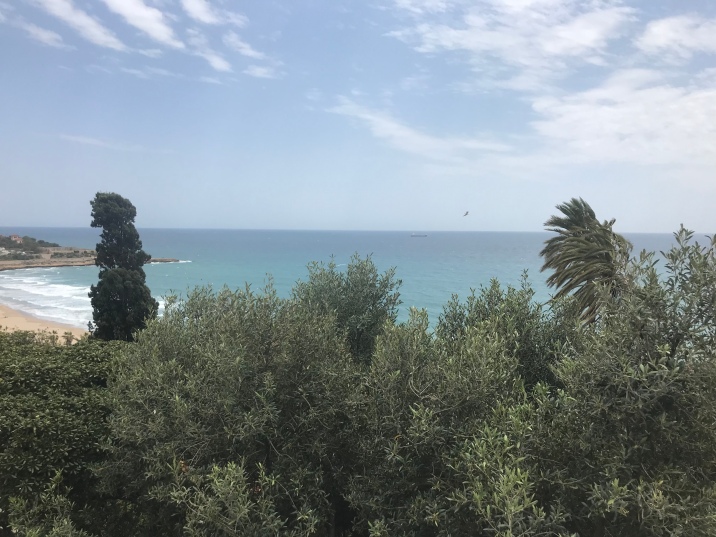 The Highway from Valencia Spain to Barcelona has many sites to see. We stopped in the seaside town of Peniscola, and the Town of Tarragona to see the Roman Ruins.

The city of Barcelona sits with the Pyrenees mountains to the northwest and the Mediterranean Sea to the east in northern Spain. Its influence comes from the Romans who had the first settlement there, as well as the Visigoths, and Muslims.

When I first decided to visit Barcelona in the fall of 2016, I was told the architecture of Gaudi was a must see. Gaudi is considered to be one of the first abstract artists with his oddly shaped structures. One does think of Dr. Seuss when you see his works. A character in one of his books would fit inside fine in one of the buildings. Gaudi died in 1926 when he was struck by a tram. His vision still lives on to this day with the construction of La Sagrada Familia he started in 1852, said to be completed in 2026. The Catholic cathedral is the site of tomb of the artist.

I have had two different experiences with accommodations in Barcelona. In 2016 I stayed at a hostel for $52 for the two night stay. The hostel was in a nice building close to the old part of Barcelona.http://fabrizziosterrace.com/ I stayed in a room for 8, but you could get a private. The hostel had a kitchen where there was freedom to cook if so desired. For a small fee they would do your laundry. This year we stayed in a bed and breakfast, with much of the same look. https://casadiagonal.com/?lang=en We had a private room for three with a view, and a terrace. It was a short walk to the metro and all we wanted to see was within walking distance.

The harbor is the port for ships cruising the Mediterranean. Sailboats and yacht’s fill in the slips nearby.

If you are lucky a festival will be happening during your visit. As I walked the narrow streets of old town in 2016, I came upon a parade. Further along the street a group resembling a circus act made a human tower, balancing on one another as they climbed higher and higher with confidence. That night a few of us went out for the music, food, and light shows, with images bouncing off of the old historic buildings. It was a festive atmosphere for friends and families; tourists and locals alike.

After an evening of exploring the city again this year we boarded a fast train to Montpellier France to rent another car. Be sure to leave a little early for your train in Barcelona. There is a security checkpoint and they do check passports. The high speed train ran effortlessly along Spain’s countryside. In just a couple of hours we were at the station in France. It is cheaper to rent a car in each country verses picking up in one and dropping off in another. Shop around for the right fit. There will be more about car rentals in future posts.

It was a good day to be in Lugano Switzerland, for the sun was shining. The water in the pool was too cold for my taste, but that didn’t stop me from lounging, enjoying the warm sun. The Montarina Hotel&Hostel was a lovely place to stay. #lugano #switzerlandtravel
Go USA at the World Cup. I was able to get a glimpse of the game today. Enjoyed watching @cmpulisic again, but this time for the US. In October I had the opportunity to see him play for Chelsea in London. #fifaworldcup #chelseafan
Loading Comments...
%d bloggers like this: