Airlines such as Easyjet, and Ryanair offer cheap rates for fights in and around Europe. There are various other airlines out there as well. The ride over the Alps as we crossed over Switzerland from Berlin, was amazing as we seemed to barely clear the steep slopes of snow covered caps. If you looked close enough you could see into the valley’s between the peaks.

I took a train from Milan to Como for a night on the lake. Como is in Northern Italy in the Lombardy region. http://www.visitcomo.eu/en/ I had booked a room at Residence Diaz for $58 for the night. http://www.residencediaz.it I was given a nice room on the bottom floor, but after ten minutes there was a knock on the door offering me a room with a view on the top floor, since they needed my room for someone else. I did not complain, my room had two floor to ceiling windows with doors opening out true to promise, to a view. The room had a big bed, a little kitchenette fully supplied, and a TV showing the American shows; “The Jefferson’s” and “Dukes of Hazard.” I did not stay inside long. It was a short walk to the Lake Como where I bought a ticket for a ride on Lake Como.

The boat took riders from one town to the next, dropping off some and picking up others. Villas, samller houses, apartments, and churches dotted the shore.

After the ride I stopped by a shop for some gelato. The creamy cool gelato is a must on a warm day of sightseeing.

The Volta temple is a must see. Alexander Volta invented the battery. His inventions can be seen in the memorial to him for a small fee. http://www.comoanditslake.com/battery.htm 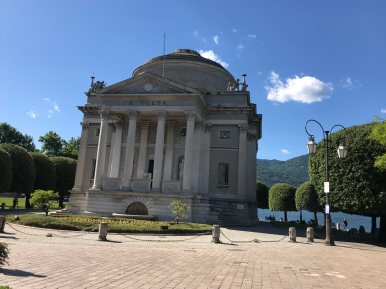 After a long walk around the Como side of the lake I made my way over to a restaurant. It was time to sample yet another type of lasagna and tiramisu. Neither the view or the food was a disappointment. I sat outside and watched the people pass by. At most restaurants I have been to in Europe there is an offer of still or sparkling water, for a small price. One bottle is more than enough for two to share.

I did not see George Clooney in Como as some have asked, but for a moment I lived nearly like him, at least as far as the beautiful view is concerned.