Galileo, famous for his ideas in the field’s of astronomy, and physics did most of his research at the University of Padua in 1604. The Roman historian Livy was born in Padua in 59 BC. He gave a great account of the history prior to his life, but also a great interpretation of Roman life during his lifetime. It is said he was friends with Emperor Augustus, the first Emperor of Rome. Padua is also famous for the Basilica di Sant’ Antonio, known as a place of pilgrimage to thousands of Catholics every year. Though flooded most days with tourists, the courtyard’s inside the complex are tranquil. St Anthony is buried inside, and you can even touch the glass that hold his relics, to include his skin and floating rib. http://www.santantonio.org/en/basilica 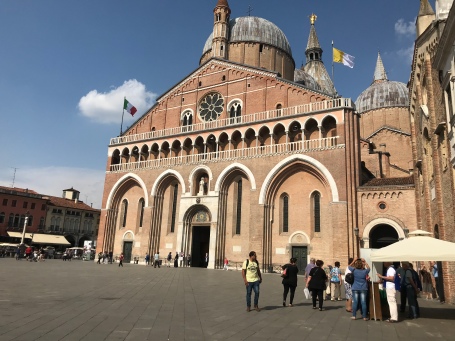 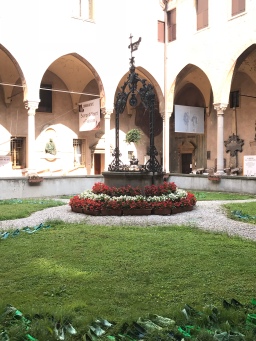 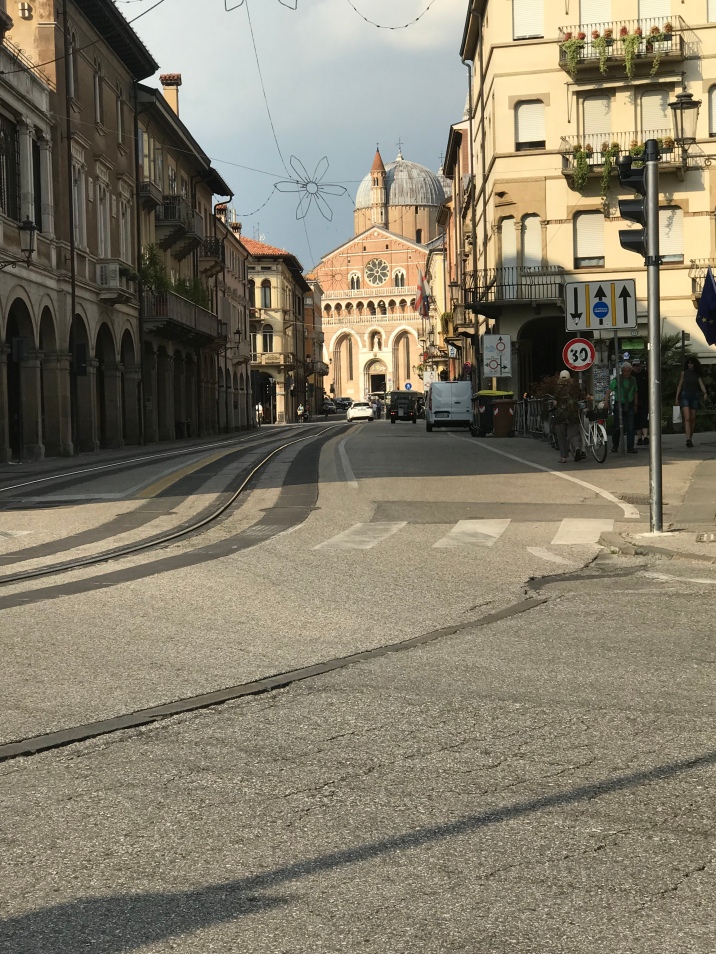 My friend Annie and I stayed just a short walk around the corner from the famous church at Hotel Al Fagano. https://www.alfagiano.com/. Having stayed here in 2013, I knew it was a nice place. The couple who own it were very nice and helpful. Our host gave us a choice of two rooms; a room with two twin beds or a beautiful room with a double bed, a terrace and a view. We took the double. The host said the hotel has been in the family for over 50 years, and his wife inherited it from her parents. She did all of the artwork; which was quite interesting. After walking around town we sat down to eat at an outdoor table of Ristorante Pe Pen,www.pepen in Piazza Cavour, and I preceded to have the best steak I have ever eaten despite it being cooked way below the normal temperature I prefer. Annie had an array of appetizing fresh seafood. After dinner we had limoncello, a lemon liquor from southern Italy. 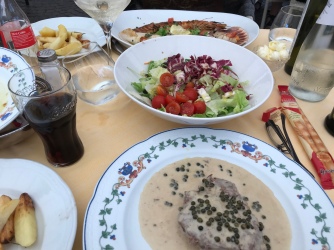 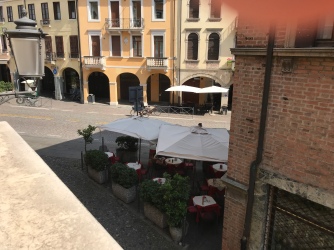 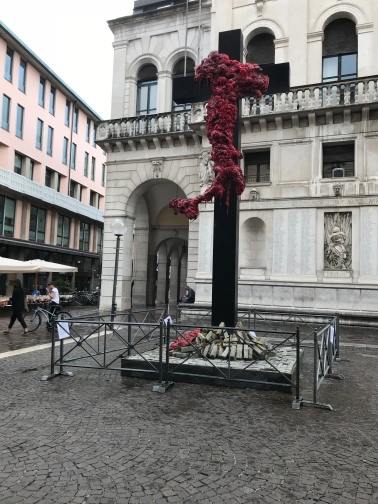 .
The next morning we took a bus over to the train station for a short ride to Venice; only 25 minutes to St Lucia. Taxi’s, waterbuses, and gondola’s are your choices for transportation. We opted to walk from island to island via the footbridges and took a waterbus back to the train station later. The waterbus is the cheapest mode of transportation. They say Venice is a sinking city, but it has lasted for hundred’s of years. In the summer there are hordes of tourists. See link below for some news about visiting the city. There have been some recent changes that will affect you if you visit. https://www.travelandleisure.com/travel-news/venice-charging-entrance-fee Venice is famous for handcrafted Murano glass, made on an island of the same name. It is a city where opera was and to some degree still is important, once having had 12 opera houses. John Berendt”s, book “The City of Falling Angels,” tells of the arson fire that destroyed the last opera house, Teatro La Fenice still standing in 1996. It has since been rebuilt. Berendt’s description of the city makes you feel as if you are there. Many movies have been filmed in Venice, with my favorite being “Bread and Tulips, with the late actor Bruno Ganz. As we walked around the streets we came upon a traffic jam of gondola’s. Even in a small canal, travel can be tedious, but much better there than on a highway with nothing to see during rush hour. 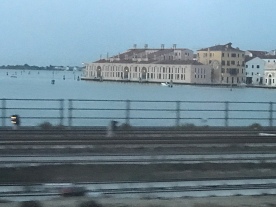 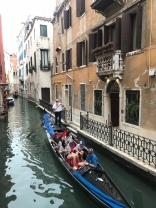 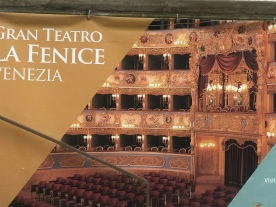 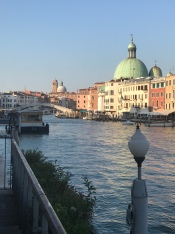 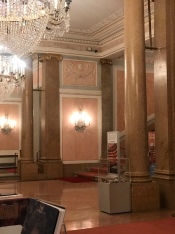 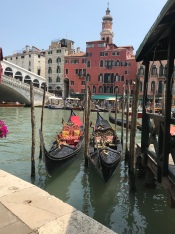 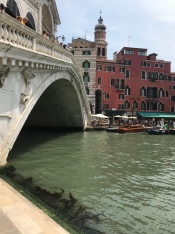 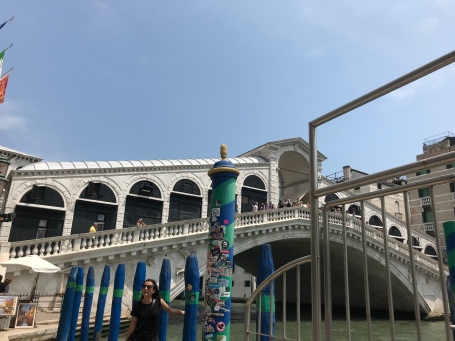 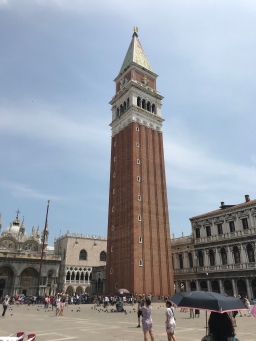 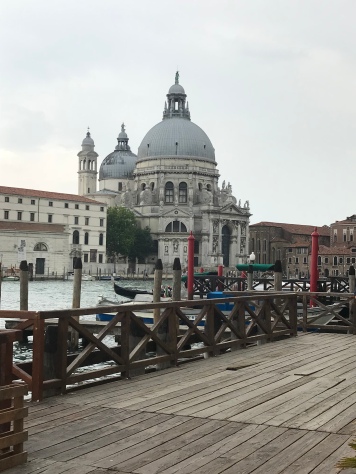 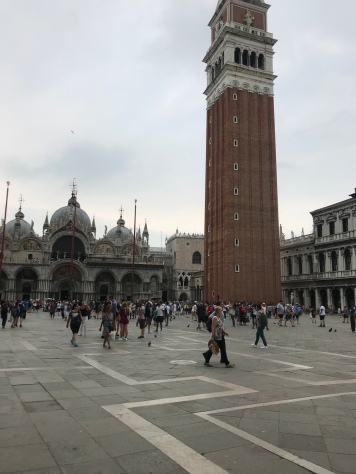 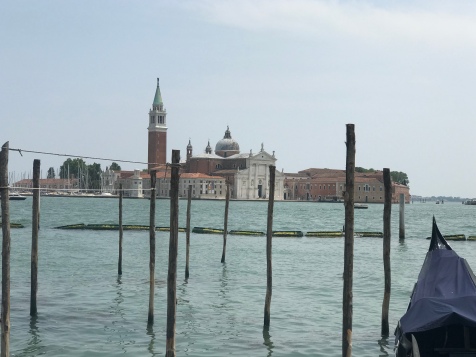 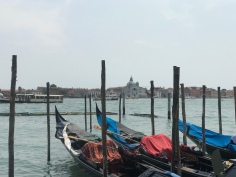 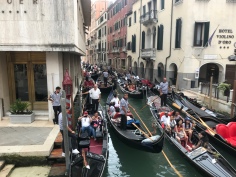 The next morning we dropped the rental car off at the airport, where Annie and I would part way; her back to the US and me onto the rest of my trip for 2 more weeks. https://www.europcar.com. I have used this company for years and have been quite happy with them. With this being said, make sure you have everything before locking the car and putting the keys in the box if they are closed. I left a book bag containing many souvenirs as well as other important items, that I would not see again for 12 days. The company agreed to keep the bag in their office. It is important to know your cellphone carrier may add charges to your bill when calling country to country; despite the global plan. I learned this the hard way after having to call the rental office when they opened from Budapest. This mishap also cost me a trip back to Venice later in the month. Ok, I know it is ridiculous to complain about having dinner in Venice before my night train to Rome, but your head would spin if I told you the whole story. I picked up the night train in Verona, and sat down in a chair only to have the conductor inform me I was to be in a sleeper car. He took me to the room, knocked on the locked door, and spoke to the man inside in Italian. Then he informed me the man had to get dressed first, noting he was in his boxers. I was so exhausted that it didn’t matter that the room was hot,and that my roommate was a man I had never seen before. I took the top bunk across from him. He told me in Italian how to lock and unlock the door, and then we both fell asleep until the next morning when the restroom called both of us at 430 am. Later the conductor would announce a wake up call as we neared Rome at 6.

2 thoughts on “Padua and Venice”