In May of 2018 I moved my son out to Colorado. We hitched a ride with a friend going out there to leave his suv so he could move his lovely girlfriend East soon after. We loaded up a uhaul and took the 23 hour ride. This post will not be of that ride except for the pictures you see, but will be about our amazing excursion to Pikes Peak. Pikes peak stands 14,115 ft high, and is a part of the glorious Rocky Mountains. There is a cog railroad that takes you to the top. It was under repairs so we drove up. https://coloradosprings.gov/pikes-peak-americas-mountain. Check out the site for details of when they will reopen, and other useful details about the area. Now I will admit I am not fond out heights. I have gotten by being in the fire department, but going up and down on a road without guardrails is another story. The girlfriend of my sons roommate did a fantastic job driving up the mountain. We stopped at various locations along the way. The views were breathtaking! There was a storm in the distance that would catch up with us later when back in the Springs. As we headed the top, snow covered the ground here and there. At the top there is a gift shop and a place to get a snack. The shop boosts in having donuts made at the highest point in the world. A new cashier was fighting altitude sickness, as it was his first day. People seemed to be walking around in slow motion, or maybe that was my brain feeling the affects of the altitude. As we sat to munch on the donuts I remember committing that John Denver’s song Rocky Mountain High had to be about this feeling of being lightheaded; I felt high. After a look at the view we made our way down the mountain. The young lady, an experienced climber, who drove us up came prepared with pretzels and pedi-lite to make us feel better. Several cars zoomed by us on the way down, but a Porsche can take the road. Usually there is a stop half way down where they check your brakes. Today they did not. 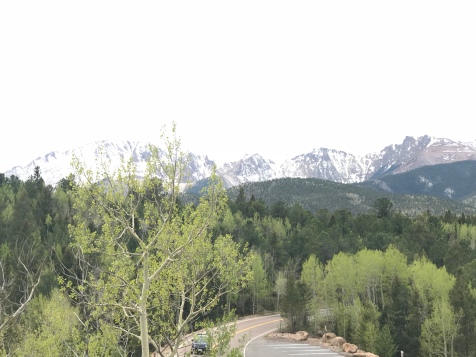 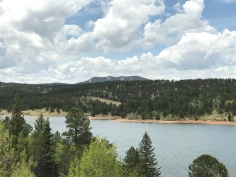 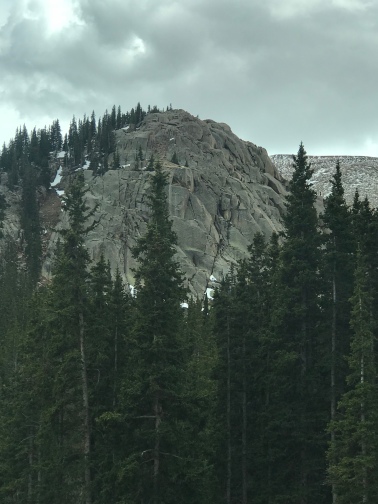 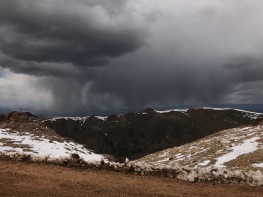 We drove through the Garden of the Gods just as the rain started to drop from the sky. The rain made contrast in colors of the land and sky more dramatic. 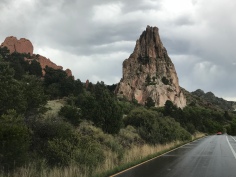 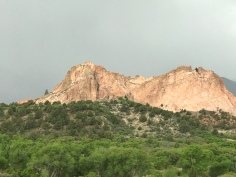 The National Fallen Firefighters Memorial is a must see. It is a nice tribute to those who lost their life in the line of duty. A former coworker and friend will be added to the list of names there next year. He succumbed to a illness on February 1, 2019, as a result of his efforts at the Pentagon on September 11, 2001.

Colorado Springs is a lovely place to visit. The views are amazing, the food is great! The pace of the little city is relaxing. Check out more wonderful views in the gallery.