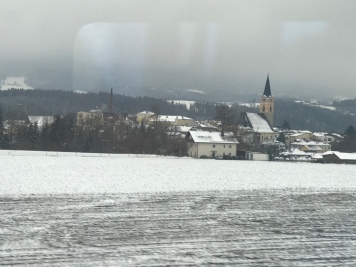 The two hour train ride from Salzburg to Munich was scenic with the snow covered the landscape. I looked out the window while eating my lunch made by my kind host Jasmine, at the Sishaus-View at Mozarts. A lady across from me plugged in her tea kettle and made a cup.

Munich is the capital of Bavaria, in the southern part of Germany. It’s history is extensive. To know all of it could take a good part of a lifetime to study. You have the occupation of the Romans, the settlement of monks, Charlemagne as the 1st Holy Roman Emperor, various familial dynasties such as the Hapsburg’s, Kings such as the Ludwig’s and the Maximilian’s, and Chancellors such as Bismarck, Schleicher, and Hitler to choose from in your studies. The cultural studies of art, sociology, language and religion influenced by these rulers and others, for example Martin Luther, is another facet. The sources seem endless.

Within a short walk from the train station, Wombats hostel in Munich was the perfect place to stay. The staff was friendly. The rooms circled around an atrium, where socializing took place, but quieted down after 10 pm.
https://www.wombats-hostels.com/de/munich/

After making my bed, I ventured out into the night in search of the Tollwood Winter Festival. It was located in Thereienwiese, home of the Oktoberfest in Munich since 1810, and next to a U-Bahn stop https://www.mvv-muenchen.de/en/
with the same name. There were bright lights, tents with various displays, and so many people enjoying the night with good food and drink. https://rove.me/to/munich/tollwood-winter-festival After a short walk around I hopped on the train and headed to Marienplatz to see the market and find dinner. A trip to Munich would not be complete without a meal in a biergarten (beer garden.) These originated in Munich. They are festive places, for good beer, food and company.

Once back in the room for the night I befriended an Australian who happened to also be Russian, after assisting him with the use of the locker;having just learned how to lock and unlock it myself. After comparing stories of life and travel, we decided to go to Dachau concentration camp the next morning. 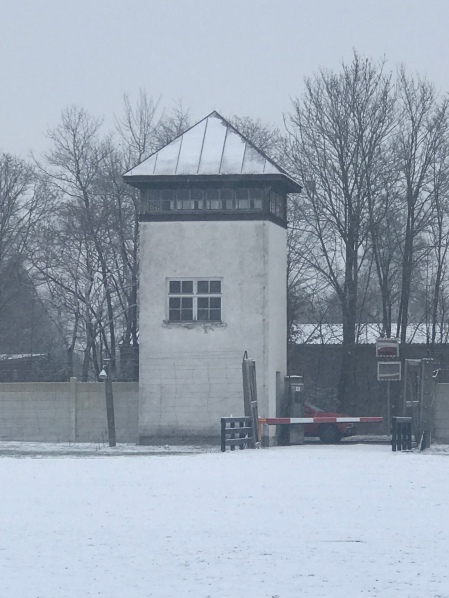 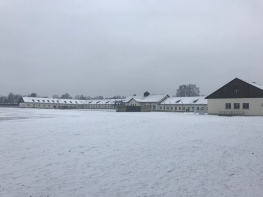 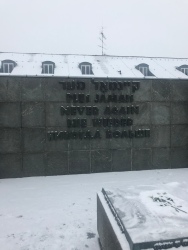 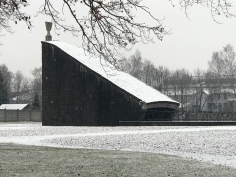 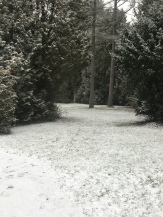 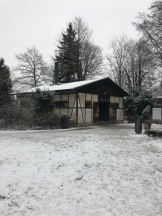 Sergei and I boarded the train for a short ride to Dachau. After assuming we had another stop, we missed the correct station, but picked up the next train to head south again, with the help of a young business man who overheard us talking about the mishap. Sergei was excited to see a MacDonald’s at the station as we arrived back to our station. He educated me on the Australian term for the fast food restaurant; Maccas.

In 1933 Hendrich Himmler, a Nazi in charge of the SS and the death camps, opened Dachau in 1933, after Hitler came to power. Dachau was a camp for political prisoners, Jews, Romas, Gays, and communists. According to the visitor site, out of the 200,000 housed their between 1933, and 1945, 41,500 were killed. Prisoners were forced to work in the factory in town. https://www.scrapbookpages.com/DachauScrapbook/KZDachau/DachauLife5.html They were housed in closed quarters. In 1965 Dachau was opened as a memorial to remind people of the atrocities that took place. The SS used this place as a training ground. Their building is used by Munich’s swat team today. As we walked around on this cold December day the grounds were covered in a blanket of fresh snow. The snow added to the somber feel of the place. Today one barrack still exists to show where the prisoners lived. Only the foundations of the multitude of others still remain. At the far end of the memorial there is a Jewish Synagogue, a Catholic Chapel, a protestant chapel, and a Russian Orthodox chapel. As you continue on past the chapels you come across the crematorium and the equally horrifying gas chamber. A smell of disinfectant permeated from the walls as I walked through the chamber. The train used to stop at the entrance of the camp, but only a cold slab portion of the platform remains, and the track no longer has a connection.
https://www.kz-gedenkstaette-dachau.de/index-e.html
There are various tours out there, which I am sure are informative, but we elected for the free tour on our own. The German people could have built over this ground, but they chose instead to memorialize it so this blatant disregard for human beings, based on religion, race, sexual orientation or political beliefs, could not be forgotten. 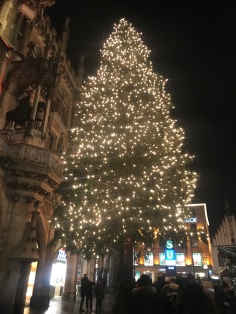 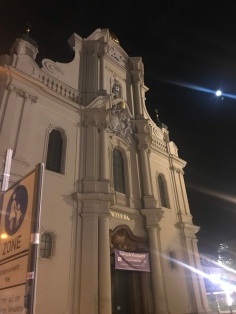 That evening we made our way to Marienplatz to see the Christmas market,the Neue Rathaus (New Town Hall), and to have dinner in the biergarten. https://www.muenchen.de/int/en/sights/attractions/new-town-hall-neues-rathaus.html As the market was closing we made our way back to the room for a good night sleep. I would head home in the morning and Sergei would make his way around Europe for Christmas and New Years.

The next morning we met up with Sergei’s travel companion for breakfast at the train station before saying our goodbyes.

Peach Tea and Pickle’s….After a second Sunday getting a homemade gyro at the farmers market, I decided to make homemade turnip pickles from the recipe given by the proprietor of the food stand. Not being a fond of turnips, I was skeptical, but they were delicious. Peaches were in abundance at the market, so i picked out some nice ones for eating in salads and a few for tea. I made a peach syrup to add flavor to black tea with extra peaches. #peaches #farmersmarket #middleeasternpickles
I tried paddling boarding for the first time today. What a great workout for the core. It was a perfect day on the lake. #paddleboardfun
Loading Comments...
%d bloggers like this: