After a short plane ride from London I landed in Nuremberg. The first thing on my agenda was to buy a Nuremberg card that would give me access to public transportation for the next two days as well as entrance to the museums throughout the city of Nuremberg and the neighboring town Furth. https://tourismus.nuernberg.de/en/booking/nuernberg-card-city-card/

My stay was in what was once the stables of the Imperial castle, but is now a grand hostel; the Jugendherberge Nurnberg. After a ride from the train station on a tram I walked toward the castle. A concrete bridge now takes the place a draw bridge, crossing over what once was a mote, surrounding the castle as motes do. I shared a comfortable room with two others overlooking the street that led to the Christmas market. The hostel accommodated families, kids traveling with schools, and single travelers, such as myself. After leaving my baggage with the place, until my room would be ready, I made my way over the museum of the castle. The view alone from the castle was amazing. The Imperial castle is rich in History. The city takes you back in time to medieval days seen through architecture. http://www.kaiserburgnuernberg.de/englisch/castle/ 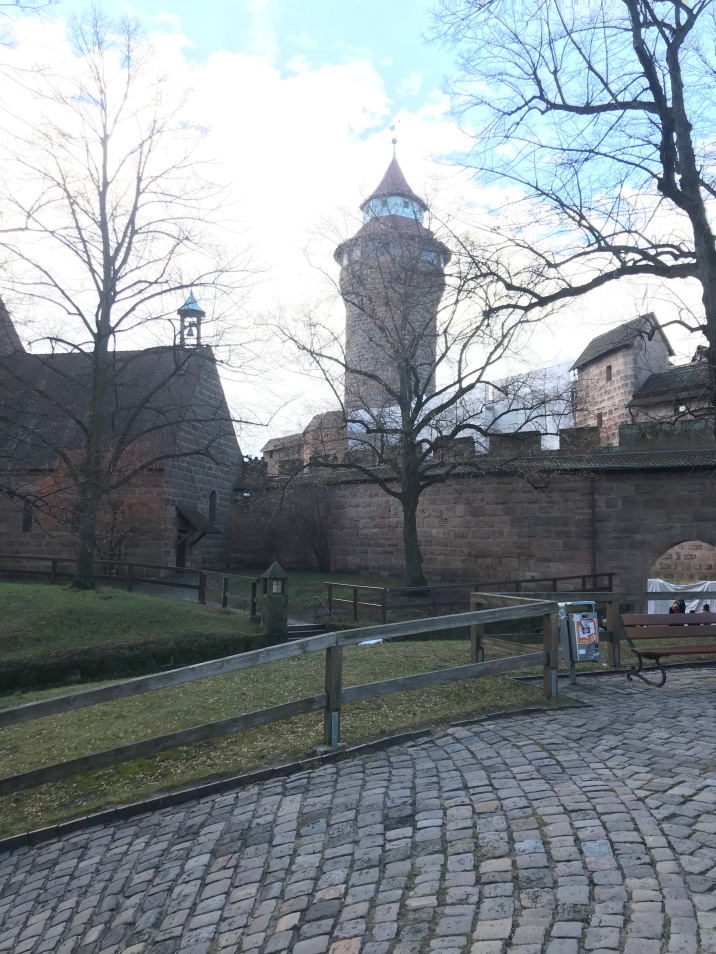 The Christmas market, Nürnberger Christkindlesmarkt, dates back to the 1600’s. The market is situated in front of the gothic church, Frauenkirche; Church of Our Lady. A choir sang Christmas carols, in German and at times American. The cold 25 F did not deter the loads of people buying the wares vendors sold or the food that was plentiful. The Nuremberg market is famous for its blueberry mulled wine, gingerbread, sausages and potato cakes. The warm potato cakes with garlic sauce were especially delicious. I fell in love with the dark chocolate covered mandarin oranges on a stick.

I visited various museums the day after arriving. I happened upon a dollhouse museum. The dollhouses on display show what life was like during the time period in which they were made, through examples of the furniture, china, and other kitchen wares, as well as the construction of the dollhouse itself. The German National Museum surrounds what was once a monastery dating back to 1381. http://www.gnm.de I especially enjoyed the history of hiking section of the museum.


A dark side of Nuremberg’s past relates to the time period of the Third Reich, and the Nazi Rallies. I did not visit the rally grounds, but I did go to the site of the Nuremberg trials, where those who committed the atrocities had their judgment before a court of law. The actual court is still an active courtroom so it could not be seen this day, but I did see the holocaust museum on the top floor. It was a fitting memorial of those who suffered under the regime of Hitler. https://museums.nuernberg.de/memorium-nuremberg-trials/

Two days is not enough time to see everything Nuremberg has to offer, but I made the most of my time there. I will definitely return some day. I do recommend free walking tours of any city in Europe. The guides are extremely knowledgeable. They work on tips, so at the end of the tour you give what you think they deserve. I have never had a bad tour. Sandemans has been my favorite group. https://www.neweuropetours.eu/

The ominous morning sky clears to bring a warm spring day. This evening the sky threatens to let go the rain inside the clouds. Thunder is off in the distance. No bike ride for me tonight. Just dessert with a carpenter bee attempting to frighten me. For dessert make a nice sponge cake with 5 eggs, 3/4 c sugar and 1 c flour. Beat eggs with sugar for 15 mins then fold in the sifted flour. Creme anglaise: egg yolks, vanilla sugar and heavy cream Make a whip cream as well. Chose your fruit and start layering. Despite the look, it is quite light and low in sugar. #dessert #clouds #springevening
Happy Easter.....this is a time of new life and renewal. Take time to reflect on the good moments in life. Dream of the ones you want and make them happen. #easter #spring
Loading Comments...
Comment
×
%d bloggers like this: