After a day around Lambeth I headed to what would be the first of many plays this visit to London. I booked a reservation at The Refinery Restaurant. It was a good idea because there were office Christmas parties in abundance. Normally this restaurant is set up with individual tables for dining, but this night I sat amongst others at a long table set for a later reservation of a big party. The place was festive and the food was great! I had steak au poivre. https://www.drakeandmorgan.co.uk/the-refinery-bankside/

It was a short walk to Shakespeare’s Globe theatre. The Globe as it exists today, is situated in Bankside, in the Borough of Southwark, on the bank of the Thames. It existence today is due to the persistence of the American actor Sam Wanamaker, for which one of the two theatres inside the present day Globe is named. The original theatre was just a couple blocks away, found by archaeologist in 1989 during an excavation. The original Globe opened to all in 1599 for Shakespeare’s players to perform his plays, but would succumb to fire in 1613. It was rebuilt again a year later, only to be destroyed by the Puritans in 1642. The remake boasts a replica of the semi outdoor theatre, and a small intimate playhouse, named after Wanamaker, based on sketches found of it. I have seen two shows in the Wanamaker theatre. The seats are reasonable; with seats being used loosely, as at the top it’s standing only. The railings are high so leaning can be accomplished without much effort. There are regular seats below. The theatre is lit as it was back in Shakespeare’s day, with candles only. The acting is top notch there. For a couple of hours they transport you back to Shakespeare’s day, through the language, the costumes and the music. This form of entertainment was popular during the Elizabethan period of England, for the rich and poor alike. Shakespeare was famous during his lifetime. 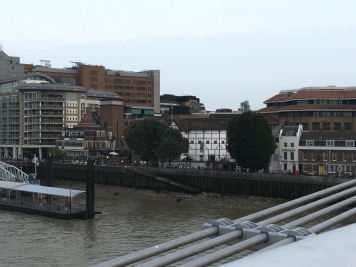 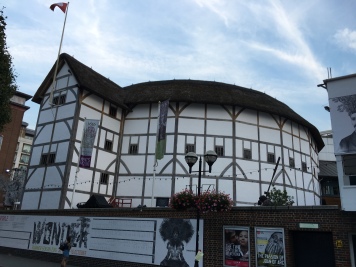 The first play I saw there was in 2016 called, “The Inn at Lydia.” It was about Caesar who when dying hears about a man name Jesus who can heal the sick. He goes in search of Him, only to learn he died three days earlier on the cross. The wise men were there adding comedy.

The play for this December 2018 trip was “Macbeth.” Many of Shakespeare’s plays to include this one were based on material he found in Raphael Holinshed’s “Chronicles of England, Scotland, and Ireland,” published in 1577. The real Macbeth reigned in Scotland in 1040 after defeating a young King Duncan in battle. Shakespeare took liberties with his plays of historical fiction, as seen in the killing of an old King Duncan as he slept in his bed. This play was first performed for King James I of Scotland, and King Christian IV of Demark, in 1606. As noted in Hugh Trevor-Roper’s, “The Invention of Scotland: Myth and History,” King James had a fascination of witches, and there were three in “Macbeth,” causing all kinds of havoc. Shakespeare may have kept this in mind for the King. Shakespeare had the play set in the 16th century, for little was known about style of dress and decorum.

The Globe Theatre is worth a visit. https://www.shakespearesglobe.com It was a short walk to the London Bridge Tube station for the ride back to Palmer’s lodge at Swiss Cottage that was my home for nine days.

2 thoughts on “Shakespeare and His Globe”

In Occoquan Virginia on Commerce St is a little place that serves delicious crepes. I had the Nutella and strawberry one. It’s was a nice morning outside to meet a friend and talk of our travels with old stories and new ideas. #crepes #occoquan #virginiacafes #travel
In 2018 my friend and I met up in Lorcano Switzerland. We looked out over beautiful lakes. Who knew there were palm trees in Switzerland; I didn’t. We went to see the James Bond jump on the Verzasca damn. My friend joked she had bought me a ticket. I of course said no way! You may remember it from a James Bond movie Goldeneye, where Pierce Brosnan jumps off. Look close in the video and you can see someone dangling. We drove up into the mountains more to find people laying on the rocks and jumping into the cold water like it was nothing; even if it did take their breath away. We had meat fondue while the World Cup played on a big screen at the restaurant. The evening brought great music from one of the hotels in a neighboring town. Can you believe Hannibal brought elephants over the Alps on his way to fight the Romans in Northern Italy? The castle in Bellinzona tells the tale. In every corner of Switzerland there is so much to see and appreciate. #swisstravel
Loading Comments...
%d bloggers like this: