The London Underground is one of the best ways to get around the vast city. I have found if you are going to be there for more than a couple of days, it is best to get a pass. The tube as the London Underground is called, uses a card called an oyster card. https://www.londonpass.com/london-transport I purchased a weeks pass in two zones. Having the pass allowed me to move swiftly in and out of the station without worrying if I had enough money on the card. I frequently used the site https://tfl.gov.uk/modes/tube/ to plan my day prior to going out. Be sure to pay attention to the times of operation. Some stations close for a period of time at night. The bus is also a good way to get around the city. You can use the oyster card for a small fare and get see the sites as you go by, while riding with the locals. The taxi is more expensive but worth at least one trip.

Trafalgar square is home to the National Gallery and the Portrait Gallery. They are free to the public, though they do ask for a small donation. The are some exhibits inside of the museums which require a ticket. We walked around looking at various works of art. My favorite are the Impressionists in the National Gallery. Seeing the portrait’s of famous musicians of my lifetime as well as portraits of famous Kings and Queens painted in their lifetime was also a treat. Admiral Horatio Nelson stands high on a column overlooking the square to remember his sacrifice at the Battle of Trafalgar in Spain against Napoleon in 1805.

My friend Karin and I would say goodbye after this visit to the museums. We saw so much during those first days of December 2018. She was to make her way back to Switzerland and I would continue with my trip. It was truly great to meet her sister, to see her again and spend part of my vacation with them in London. 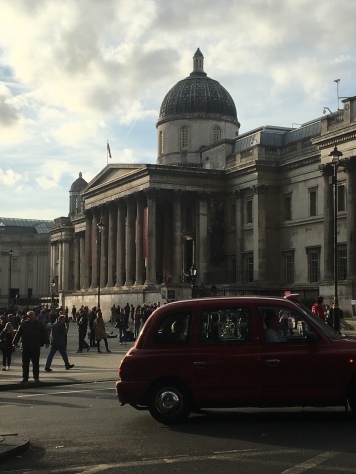 I visited inside of St. Martin in the Field’s church during my October 2017 trip to London after walking by it during previous trips. I happened upon a rehearsal for a show that weekend with a performance of Mozart. Since I would miss the show, I made a mental note to see a show there in the future. In the main part of the church you can see shows featuring the music from all the classical greats. For this trip I decided to see a Jazz show in the Café in the Crypt below. T.J. Johnson and his band put on a wonderful show. There were many couples dancing. I nearly got up myself to join them. https://www.stmartin-in-the-fields.org/

One thought on “Trafalgar Square”

I finally made it to Highclere Castle outside of Newbury UK. The site is more than the setting of “Downton Abby,” though this series made us aware of this wonderful place. I attended a history festival here last week. Even Churchill was present and was kind enough to share a picture with me. There were others there showing rural life during World War II, from the land girls to the local regiments. It’s was an all out effort to help during the war. Highclere was no exception. They took in children from London, many of whom would become orphans. Their parents were trying to keep them safe from the bombing in London. It was wonderful to spend the day here. #highclerecastle #downtonabby #englishcountryside #britishhistory
Before I left for vacation I purchased a passport holder from a friend. It had a privacy protector for my debit cards and I could fit everything else I needed in it. This is Neuschwanstein castle in Germany. King Ludwig had a vision of the castle set in tranquility. He certainly achieved this as seen in the amazing views. #Neuschwanstein #Bocephusleatherworks
Loading Comments...
%d bloggers like this: