Eating a Portuguese roll with ham and cheese, heated by a street vendor next to the Swiss Cottage tube, stop was a nice start to a chilly day. The sky was clear for the moment, but the temperature had dropped. The cold would not be a deterrence; it was a beautiful day. It was a fairly quick ride on the underground during rush hour to get to the London Bridge Station by the Shard building to meet up once again with friends. https://www.the-shard.com/ The Shard is the tallest building in Western Europe. 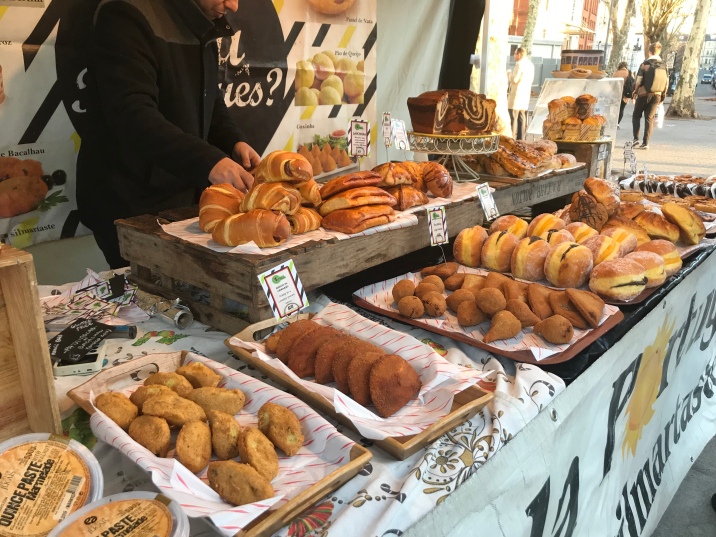 First I walked through the Borough Market. The area surrounding the Borough Market is like the rest of London, rich in history. The market dates back more than 1000 years,and may even go back to the Roman days as well as the days of the Vikings. In the morning vendors are seen prepping for the busy day of selling their foods to tourists and locals alike. There is local fare as well as food from the culturally diverse population that exists in London today. The food there is reasonably priced and quite good. http://boroughmarket.org.uk 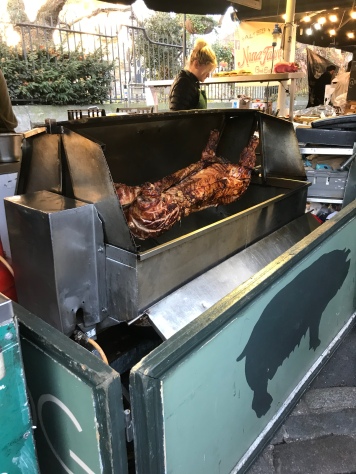 We met at free exhibit presented by the University of London in the London Science Gallery, next to the Shard. The exhibit was about addiction to technology, but also showed research on other addictions, such as sugar.

We walked along the river Thames and crossed on the Millennium Footbridge with a view of St Paul’s Cathedral in search of jacket(stuffed)potatoes. We passed the London Firefighter’s memorial. This was dedicated by Queen Elizabeth in 1991 to commemorate those firefighters who died during World War II; especially those who fought the havoc brought on by the Nazi’s during the Blitz of London. With a view of St Paul’s we warmed ourselves with the stuffed potatoes at the Soho Coffee Co. http://sohocoffee.com/st-pauls-london 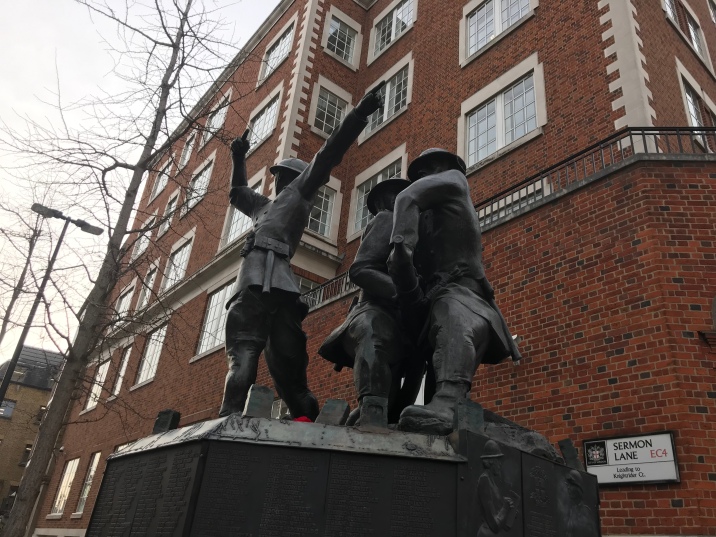 St. Pancras Train station was built in 1868. For a quick ride to Paris you can board the Eurostar here. The historic train station was decorated for Christmas on a grand scale. https://www.eurostar.com 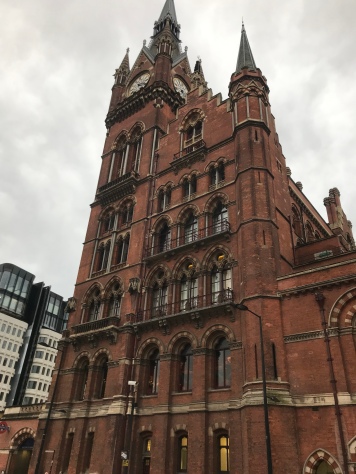 Covent Garden was also decorated for the season. Shoppers were bustling around shopping for gifts. The restaurants were filling up for an early dinner before a show in the West End. I myself stopped at a restaurant that had a special menu purposely for a preshow dinner, but they allowed me to have a dessert before the crowd. I sat at a table by the window sipping my tea, enjoying tiramisu, and writing in my journal. http://www.salieri.co.uk The restaurant Salieri, I can assume, was named after an Italian composer from the 1700’s. Ironically I saw an opera singer dressed in a black cape walk by on his way to his performance.

We decided to meet up for the show “Wicked.” The theatre is located across the street from Victoria Station. We bought our tickets, then walked across the next street to eat at Il Posto, an authentic Italian restaurant with Italian waiters. http://www.ilpostovictoria.co.uk “Wicked,” is the story of the witches in “The Wizard of OZ.” The production was great and we left there liking the wicked witch who was not as wicked as we thought; in fact far from it. This would be the first of many shows I would see this vacation.

2 thoughts on “Another Eventful Day in London”